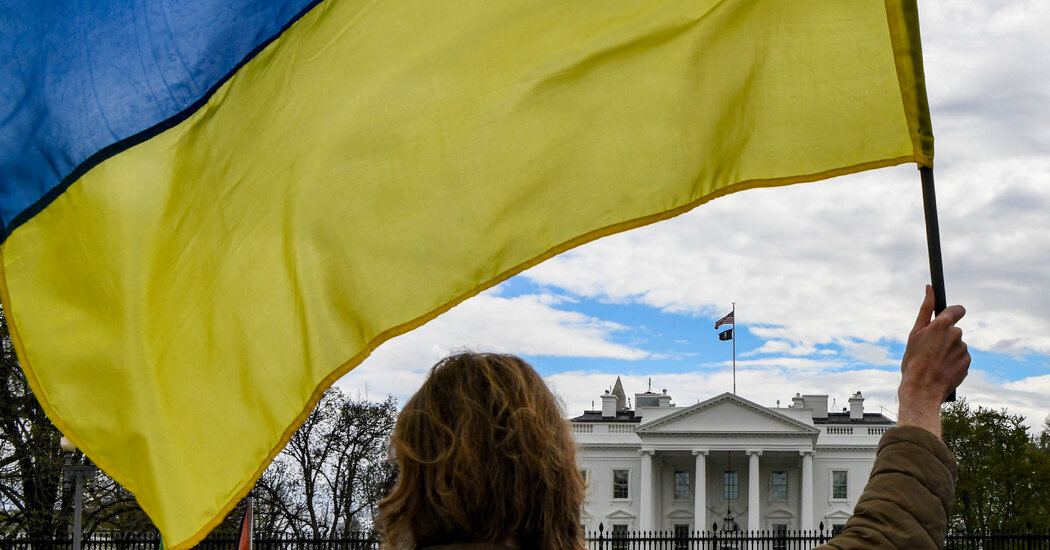 Russia’s war in Ukraine has become the greatest economic challenge of President Biden’s time in office, threatening to push the world into a recession that could endanger an already fragile American recovery.

The combination of punishing sanctions, championed by Mr. Biden and his allies, and Russia’s retaliation has ricocheted through global food and energy markets, exacerbating already high inflation and undercutting global growth. An oil shock set off by the invasion sent average gasoline prices above $5 a gallon nationally in June, before they fell steadily in July and August.

This week, the European Union is expected to put finishing touches on a plan that would attempt to contain further economic damage by imposing a cap on the price that Russia can earn from selling a barrel of exported oil. The untested idea, engineered by Mr. Biden’s Treasury secretary, is aimed at keeping Russian oil flowing to the global market even as Europe plows ahead with new restrictions on Moscow’s oil sales.

In the year to come, that price cap and other efforts to manage the war’s global fallout should be Mr. Biden’s primary economic focus. With few legislative options available after his party lost control of the House, Mr. Biden will need to find ways to shield American markets from the war’s effects, including new international initiatives to bolster food supplies and ward off a potentially cascading financial crisis in developing nations.

Mr. Biden and his economic team spent much of the Group of 20 nations summit this month in Bali, Indonesia, laying the groundwork for those efforts. They negotiated with wealthy nations over the best ways to ramp up global food production to replace crops lost in Ukraine, in hopes of relieving food shortages that have particularly hurt lower-income countries. And they attempted to broker progress on a system to more readily bail out highly indebted, lower-income countries — like Sri Lanka and Chad — that face fiscal crises as war-inflamed price increases push central banks to raise interest rates and, with them, borrowing costs.

But Mr. Biden’s biggest economic decisions in the coming months are related to the war: how best to support Ukraine’s resistance to the Russian invasion and how aggressively to push for an end to the fighting.

The war has been a humanitarian crisis for Ukraine, but “it’s also been extremely costly for the world,” said Gita Gopinath, the first deputy managing director of the International Monetary Fund, who participated in the Group of 20 meetings. “We’re already in a pretty difficult situation even without dramatic escalation.”

Ms. Gopinath said that during the summit, “a common refrain from everybody was, the war needs to end, because the consequences for the economy are very high.”

Administration officials agree that the best way to strengthen the global economy in the coming months would be to hasten the end of the war — which Mr. Biden has repeatedly said must come on Ukraine’s terms.

In the meantime, administration officials say the centerpiece of their efforts to minimize economic damage is a plan to impose an oil price cap — at a level that European officials are still haggling over — on Russian exports. Mr. Biden has pushed the idea through months of transcontinental negotiations. Its goal is to keep millions of barrels of Russian oil flowing to the global market even as European sanctions come online — while locking in a reduction in the revenues Moscow needs to continue its war effort.

The plan is essentially a way to avoid a potentially catastrophic global oil shock that Mr. Biden might otherwise have helped to set in motion this year when he encouraged Europe to follow America’s lead and ban imports of Russian oil. Administration officials are confident the cap will do just that, keeping oil on the market, even though the high level of the price cap will limit its bite into Russian revenues.

“It’s safe to say that we’re optimistic that a successful price cap will avoid a major energy price shock,” Ben Harris, the assistant secretary for economic policy at the Treasury Department, said in an interview. He added: “This is a case of advance planning avoiding a crisis.”

The president has few domestic options if those plans fail. Because his party lost control of the House, Mr. Biden will almost certainly be limited in his ability to push new economic measures through Congress over the next two years.

The International Monetary Fund and the Organization for Economic Cooperation and Development have cut their forecasts for global growth next year, citing lingering drags from the Russian invasion.

The war, leaders of the Group of 20 nations said in a declaration at the end of their summit in Bali, “is causing immense human suffering and exacerbating existing fragilities in the global economy — constraining growth, increasing inflation, disrupting supply chains, heightening energy and food insecurity and elevating financial stability risks.”

At the Group of 20 summit in Bali this month, Mr. Biden and his economic team pushed other policies to soften the war’s economic damage.Credit…Doug Mills/The New York Times

Mr. Biden cannot end the war on his own. But he can seek to minimize its economic pain.

That starts with the price cap. A European Union ban on the import of Russian oil will go into effect next month. Those sanctions could knock millions of barrels of Russian oil off global markets and send crude prices soaring.

The price cap attempts to defuse that possibility with a novel but untried plan to allow Russia to continue selling oil on the global market, but at a discount. That would reduce the oil revenues Moscow is using to help fund the war. It would also keep oil prices steadier and avoid what some forecasters estimate could be as much as $7 a gallon gasoline in the United States. And it would relieve some strains on developing nations that are struggling economically, by potentially allowing them to buy Russian oil at a sharp discount from market prices.

Oil futures traders appear to share the administration’s confidence that the plan will work: They have not priced in any disruptions to the market in the months to come.

Russia could still retaliate against the plan and pull oil off the market, sending prices soaring anew but also cutting off revenues to Moscow. It could also raise economic risks to the world by escalating the war.

Moscow has recently ramped up its rocket attacks on Ukrainian targets, including civilians.An apparently accidental detonation of a Ukrainian missile in Poland has reminded the world of the risks of an escalation of the conflict that could spill past Ukraine and into Europe and beyond. Mr. Biden has thus far succeeded in preventing escalation by keeping the conflict from directly affecting NATO allies like Poland. More stray missiles — or provocations by Moscow — could challenge that calculus.

Tankers outside Nakhodka, a Russian port city. A price cap on Russian oil could defuse the possibility of a global oil shock.Credit…Tatiana Meel/Reuters

Mr. Biden insists the American economy, with a labor market that continues to add jobs at a hot pace, is well positioned to endure any new drags on the global economy from the invasion. His aides note the United States, as a large energy producer, is not suffering like Europe from a lack of access to Russian oil or natural gas.

He has faced little domestic political pressure over his Ukraine decisions thus far. While the war has filled newscasts and commanded much of Mr. Biden’s time, including frequent speeches, it has not yet become an electoral wedge issue. Ukraine did not make the list of the top 60 topics of campaign advertisements nationwide in the midterm election cycle, according to data from AdImpact.

But should Mr. Biden seek re-election, the economics of the war could play a large role. It could push up gas prices, which tend to affect the public’s view of the president. Stubbornly high food and energy inflation could prod the Federal Reserve to raise interest rates faster, and for longer, than officials currently forecast. That would slam the brakes on growth and raise the odds of recession.

Mr. Biden has repeatedly said those threats would not deter him from doing what he believed was right in Ukraine. Asked at a news conference in Spain this summer how long Americans would need to pay higher gas prices as a result of the war, Mr. Biden was blunt. “As long as it takes,” he said, “so Russia cannot, in fact, defeat Ukraine and move beyond Ukraine. This is a critical, critical position for the world. Here we are.”

In a news conference in Bali this month — after both surprising success in the midterms and several days of centering economic issues in conversations with foreign leaders — Mr. Biden did not specify any updates on how long that process of defeating Russia might take, and what toll it might take on the economy.

He took only five questions, none of them on economic issues.